I watched an episode on the “W Network” concerning T & T Supermarket, Canada’s largest Asian supermarket, in which Tina Lee, T & T’s Strategy & Operations Executive Director, goes undercover in order to find out what’s really happening on the “front lines” where customers interact with employees. Tina rationalized that many dynasties in China fell when the leadership lost touch with the people. She wanted, therefore, to bypass middle management and see what was actually happening with her own eyes.

Tina became nearly unrecognizable with her short-haired wig, large glasses and over sized, red worker’s cap placed slightly ajar on her head. None of the employees she engaged with could ever have imagined that “Linda” was, in fact, their boss.

It was precisely through her disguise and the casual and candid conversations she had with her employees that Tina was able to gather information she would otherwise never have obtained. She was able to see for herself how managers trained employees, how they interacted with customers, what skill level they possessed, and what improvements were necessary to make the business run more efficiently.

Get your hands dirty

Tina is remarkable because she isn’t afraid to get her hands dirty.  She hardly flinched when handling live lobsters, bravely cut a wide variety of meat products, and even made a cake from scratch. She was working, learning, and communicating nonstop with her ears wide open.

Tina has a knack for connecting with people. She has “the touch.” While humbling herself and revealing certain weaknesses (like making mistakes), Tina was able to obtain her employees’ trust with humor.

I was very impressed when, at the end of the episode, Tina calls her staff to her office and reveals the truth to them. She rewards her employees for their hard work and her generosity toward them is both commendable as well as business smart. Her employees’ fidelity will, most likely, be reinforced; turnover will be stopped in its tracks; production will increase; and customer satisfaction will grow.

In the “telephone game,” information that is whispered in the first person’s ear tends to become distorted when spoken out loud by the last person in the chain. In a similar fashion, executives who follow in Tina’s footsteps will be surprised by what they see and gain deep insight into the business they run. 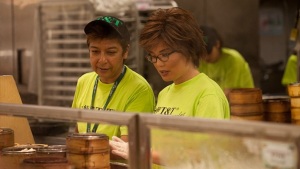